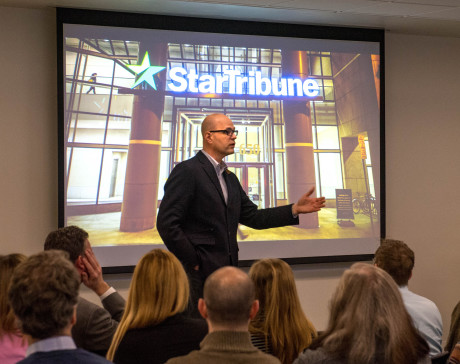 On Thursday, March 10, 2016 a sold-out crowd of creatives gathered at the Star Tribune’s beautiful downtown headquarters to listen to presenters discuss the huge undertaking of the newspaper’s brand refresh. The event was part of #mINhouse, AIGA Minnesota’s In-House Design initiative.

The Star Tribune has been an institution in Minnesota for nearly 150 years, and balancing the brand’s history with today’s multi-channel, constantly updating world was a team effort between the In-House team and the design agency they worked with, Larsen. 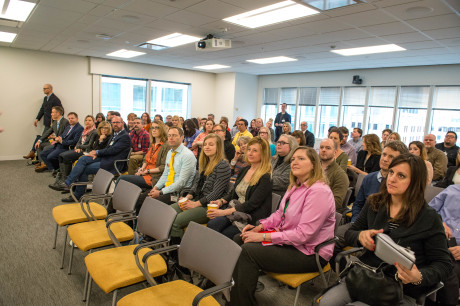 Speakers from the Star Tribune included Jane Messenger, Creative Director of Brand and Promotions, and Steve Yaeger, Vice President and CMO. Paul Wharton, former VP of Creative at Larsen (now Owner, WhartonWorks) and Gwyneth Dwyer, former Content Strategy Director at Larson (now VP of Brand, Regency Beauty Institute) also spoke about the project from the agency side. They discussed the evolving, challenging environment for newspapers, and how the Star Tribune took control of its own story through a brand refresh. Larsen and the Star Tribune team clarified the brand’s identity and intentions through company-wide conversations, then sought to convey more fully that truth throughout their wide-ranging yet flexible brand standards.

The group of more than 70 attendees learned about the thinking behind the brand toolkit produced by Larsen, and how that toolkit was implemented by the in-house designers over media as varied as newspapers, websites, apps, delivery trucks, event signage — even the interior design of the company’s downtown headquarters. After the presentation and Q&A session, the group went on a tour of the Star Tribune’s sleek new office space. 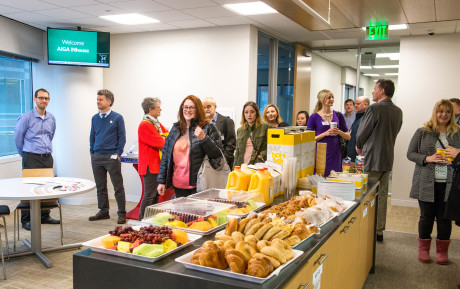