2014 marks the centennial of the professional association for design

AIGA, the professional association for design, celebrating its centennial in 2014—marking 100 years since the organization was founded in New York City at the National Arts Club. AIGA’s focus and reach have expanded considerably since 1914: from 40 founders to 25,000 members, from a New York club to a nationwide network, and from an institute dedicated to graphic arts to an active community embracing all communication design disciplines.

“The AIGA Centennial is a chance to look back at our roots as designers and to look forward to our growing impact in society,” said AIGA Executive Director Richard Grefé. “But more than that, it’s an opportunity to capture the many reasons that design matters.”

Celebrations kicked off on January 21 with the launch of “100 Years of Design,” an interactive exploration of design’s rich legacy and growing impact. Visitors to the site are encouraged to learn more about American communication design through significant works, interviews and profiles, and to contribute their own favorite examples. For “Centennial Voices,” an essay series that will be published on AIGA.org throughout 2014, AIGA is inviting industry leaders to contribute personal reflections on the past, present and future of design.

AIGA Minnesota’s two part Centennial Day event, kicked off with photographer Jay Larson capturing an image of members light painting the letters “AIGA 100″ commemorating the 100th birthday of the organization in the great outdoors, in true Minnesota fashion. Attendees then moved indoors to the Aster Cafe’s River Room for cake and a toast along with viewing the projections of the favorite moments submitted by our members, past/present chapter leaders, and founding members. After the special Centennial toast with attendees, there was a live performance by the New Insect Overlords band, featuring Paul Shambroom, Steve Michels-Boyce, and Gary Krainak. 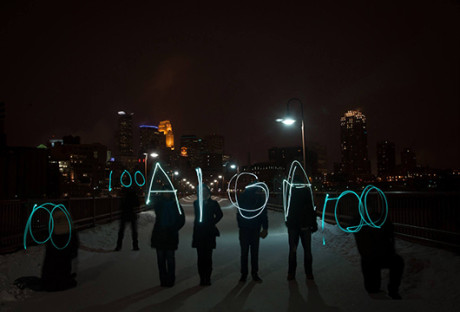 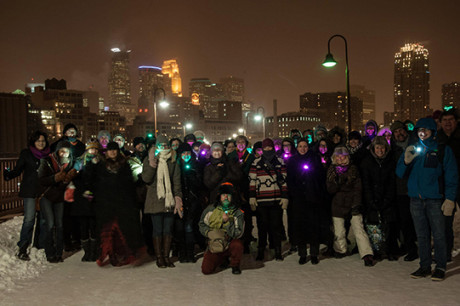 AIGA’s 67 chapters across the United States will celebrate the centennial with dozens of events and activities throughout the year; highlights include exhibitions, networking receptions, parties and celebrations honoring AIGA Fellows. One of the largest celebrations will be “The AIGA Centennial Gala” in New York City, honoring a special class of 24 individuals with the prestigious AIGA Medal for lifetime achievement in design. A full list of centennial activities is available at 100.aiga.org.

Several public exhibitions are planned to highlight design’s impact and the history of AIGA. “Facing Forward” at the AIGA National Design Center will celebrate AIGA’s history which opened on February 19th. The exhibition is on view through April 4 at the AIGA National Design Center in New York City. The AIGA Minnesota chair was designed by Timothy Eaton with consulting by Eric Madsen. This encapsulates the roots of our chapter as originated from the 1987 poster design housed within the AIGA archives.

Installation photos of “Facing Forward: AIGA at 100” by Steve Haslip. 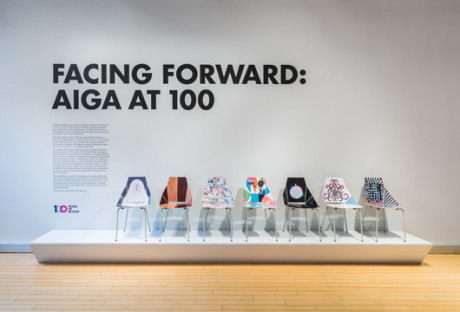 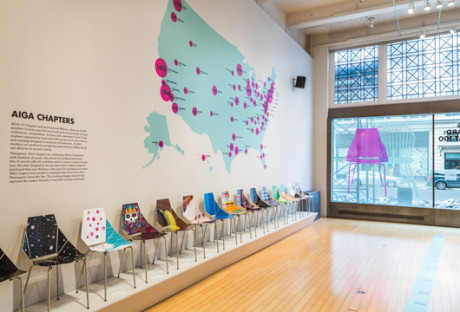 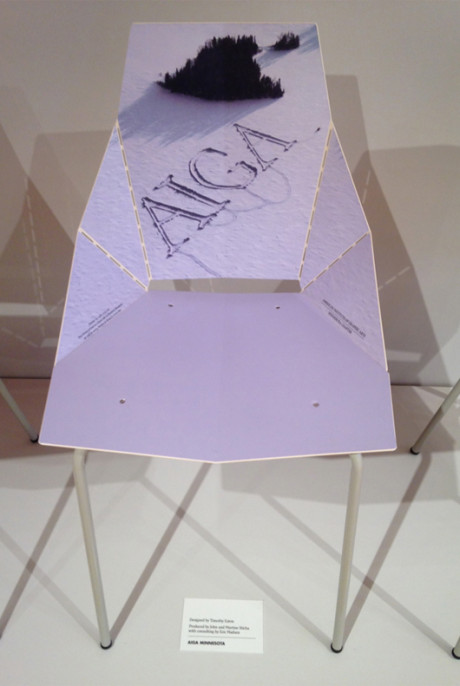 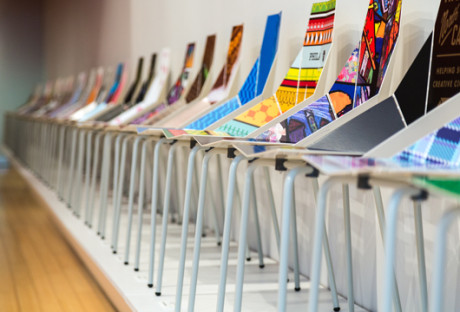 Whether you get involved with local activities, explore an exhibition or attend a national event, celebrate AIGA and design this year!

We are still accepting submissions for favorite AIGA moments. Tweet memories and photos via twitter by including the @aigamn twitter handle and #AIGA100 hashtag to be included in the collection.