“Improvement has its price. The MGDA presidency becomes a bigger responsibility than anyone wants. Dale Johnston consents to take on the job for six months in order to save the conference and show, on the condition that the membership votes to continue the organization into 1982. A blizzard on election night threatens voter turnout and the election, but, hey, this is Minnesota. Bob Fleming is elected president, and the organization survives.”

This is the first of many times when dedicated volunteers stepped into the breach to insure that MGDA and AIGA Minnesota survived difficult circumstances that threatened the organization’s very core. Their leadership skills, commitment to the organization’s mission, and sheer hard work are to be commended by all of us who are privileged to follow in their footsteps.

Although difficult to measure, the growth of the graphic design profession in the upper Midwest (closely allied with printing and publishing) can be seen in the significant increase in entries (258) for the 1981 Minnesota Graphic Design Show. A distinguished jury chose 89 entries representing 39 graphic designers, all of who received certificates of excellence. The judges included the respected designers Greg Samata, Samata Design, Dundee, Illinois; Gary Williams, Manager of Graphic Design and Corporate Identity, Chrysler, Detroit, Michigan, and Ron Kovach of Ronald Kovach Associates, Evanston, Illinois. 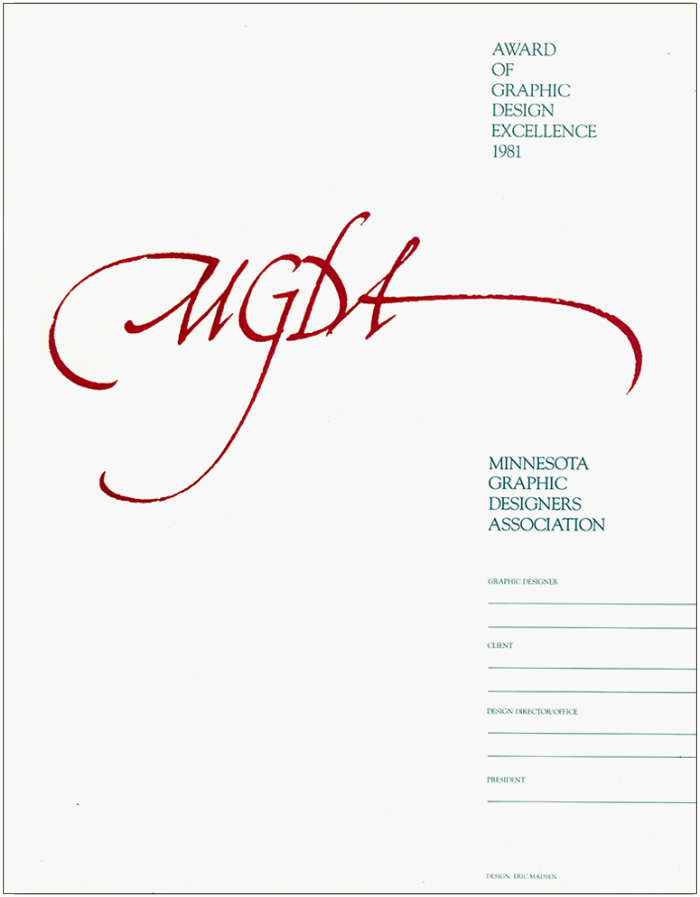 Dale Johnston summed up his interim presidency with this poetic review of MGDA in 1981.

From the view of this Pres,
the year (in perspective)
was unusually short
but extremely effective.

Just 2/3rd’s of a year-
We got started in May.
Little was big with us.
Work seemed like play.

There were lots of new faces.
Our membership grew.
Now MGDA
numbers 82.

The conference at Lutsen
was our second successful.
The days were quite sunny,
the nights never restful.

Jensen’s poster folded.
We all spread it flat.
Now who’s disoriented?
Designers work like that.

In November elections,
You chose your new leaders
and we were succeeded
by able succeeders.

The early election
was not a defection
but a scheme and a ploy
for their full term of joy.

It seemed a short time
from May to December,
thanks to my crew
and thanks to you members.

And…here’s to all you
Who slaved through the summer.
You kept MGDA
From being a bummer.