A Need for a National Graphic Design Organization?

“Please make a priority out of the question of how we might form a larger alliance of graphic design associations.”

—Robert Vogele, President of the Society of Typographic Arts (STA), 1980

The first Lutsen Design Conference sparked a serious dialogue between the MGDA and STA, Chicago’s oldest design organization, about the creation of a National Graphic Design Organization. MGDA President Tim Larsen summarized these discussions in a cover story for the Fall 1980 issue of the MGDA Newsletter.

Sound familiar? Today we take for granted the mission of AIGA chapters to allow its members to form powerful social and professional bonds through local conferences, competition, lectures, and community events. But this wasn’t the norm in 1980. In fact, AIGA (whose headquarters were located in New York City) was resistant to the idea of chapters until pressure from designers nationwide compelled them to consider the idea.

In 1981, AIGA President David Brown announced that the board of directors had voted that the Institute become national, “in fact, as well as in name.”Chapters began to form, based on a model in Philadelphia, which became the first AIGA chapter. It was followed by Cleveland, New York, and San Francisco. MGDA became an AIGA chapter in 1986. 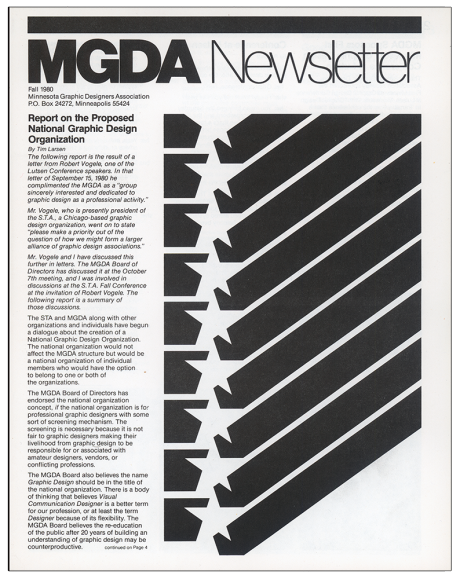 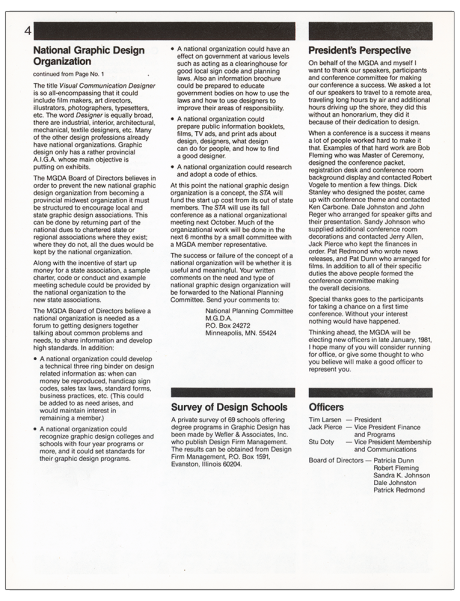